Website Speed Test with and without PageSpeed Ninja and Cloudflare APO

Website load time is based on several factors. The server configuration, number of plugins, CDN used, static files, dynamic assets and many others. You can eliminate render blocking JavaScript and CSS above the fold using optimization plugins.

PageSpeed Ninja is one powerful wordpress site speed optimization plugin. It has very few settings and many of them are automated. This gives the website owner not to dwell on the technicalities of optimization rules and concentrate on the content.

The Performance grade score alone will not rank you higher up in the search results. There are different factors like bounce rate, HTTPS security, domain authority, page authority, user experience, manual actions, google core updates and many things.

To be in-line with other pages for your keyword, you need to be a fast loading site. Since this is one of the core-signal that has been vocalized by Google to be a ranking factor, we presume that slow websites can hinder your rankings.

Though slow web pages can rank higher. It depends on the amount of backlinks and also quality of content. For small and medium business owners, it is better to have a fast site. This way you have a chance to outrank your competitors on speed.

In order to see the different performance metrics and web vitals using PageSpeed Ninja, we have tested 3 web pages with a lot of images, plugins and minimal resources. Ads slow down the page. So we did not put any ads on the site, to check if we can get the perfect score and web vitals.

The most important addition to this site is the Cloudflare APO. This is a new feature which improves the TTFB values. I did not use the minification features of this CDN service. All the other cache operations were from PageSpeed Ninja.

AMP pages were used for mobile. But the free version of GTMetrix does not test on the mobile device. It uses the desktop version of the mobile page. If you purchase the Pro plan, then you can select the mobile testing and premium test locations.

Compare the features of LiteSpeed Cache and WP Rocket

Additional services provided by both the WordPress plugins

Another site was taken to test the performance of this optimization plugin. This site also had more or less the same number of plugins. AMP plugin was used for mobile pages. In addition to that images were compressed with Smush Pro. For structured data, Schema plugin was enabled.

There were a total number of 18 active plugins. SEO and Rating plugins were used as part of this. This site was also using Cloudflare free plan. But the APO service was not enabled for this site. It was expected that TTFB times would be slower, because of this.

It is a comparison of LiteSpeed Cache vs. WP Rocket desktop results in GTMetrix

The structure audit in the GTMetrix speed test were successful with PageSpeed Ninja and Cloudflare APO enabled. Even the server response time was great. Though both the sites were hosted on the same shared server of DreamHost plan, this site did not give any errors.

All the 3 pages were loading quick enough when using PageSpeed Ninja and Cloudflare APO service. The GTMetrix grade scores were all A for both desktop and AMP pages.

The waterfall model of this speed test shows much quicker TTFB times compared to the other site. This is predominantly because of Cloudflare APO. The initial request time was as quick as 350 to 400ms. This is very fast compared to without using the APO service. We can say that APO was successful in reducing the initial server response times and TTFB.

Since most of the resources were compressed, there was not much of load time from the CSS resources. JavaScript execution was also reduced considerably in the GTMetric test due to minification and GZIP compression. Fonts also did not take much time to load. GeneratePress fonts were also loading quicker.

The number of total requests and page load times were also low when using the PageSpeed Ninja optimization plugin. 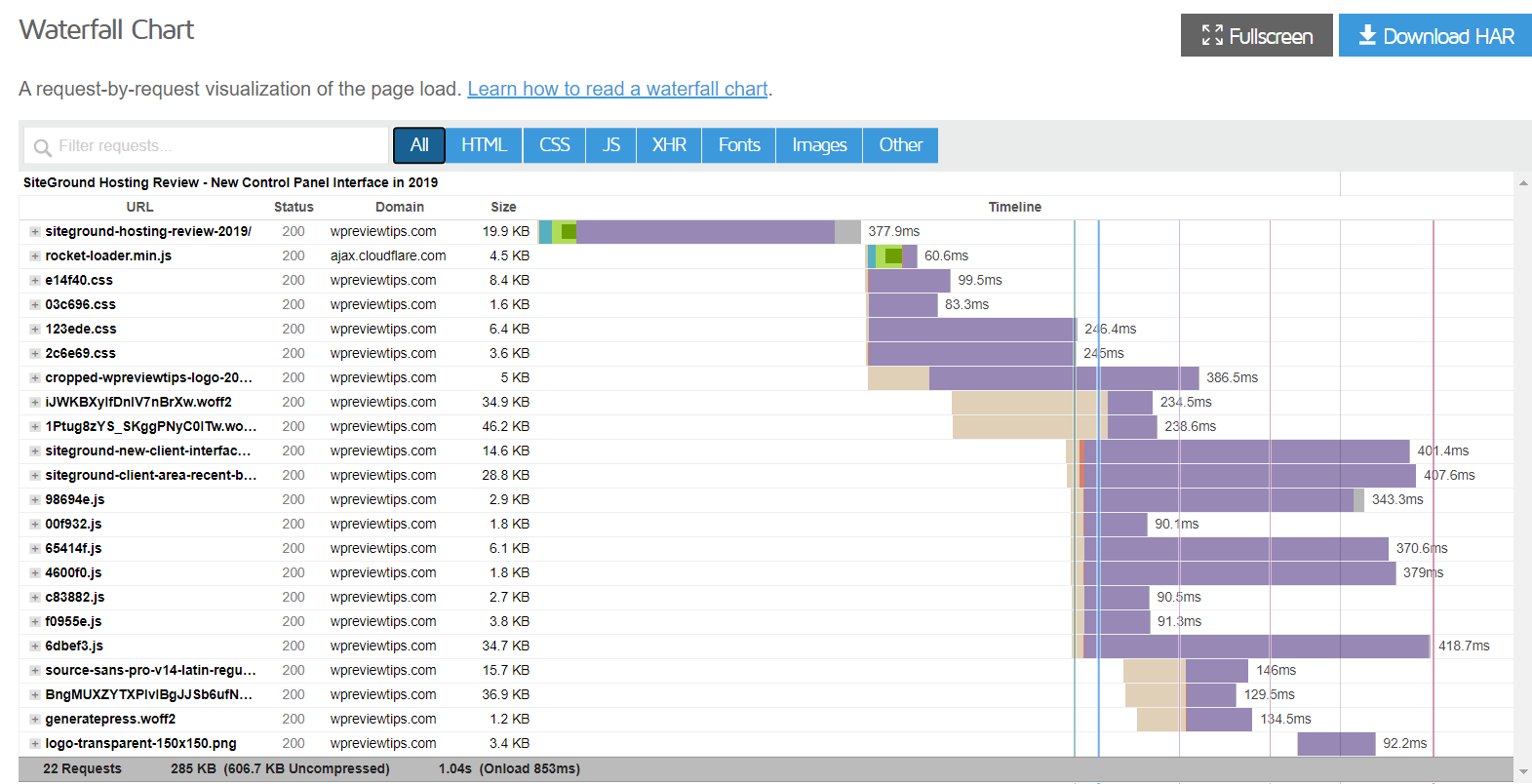 The initial response time of AMP pages was very quick compared to the desktop pages. It was as low as 90 to 120ms. The GTMetrix speed test did not notify of any CSS resources in the AMP version. The number of JavaScript resources were also low. Most of them were from the AMP elements.

Initial server response time was high when the pagespeed plugin was not used. Large layout shifts were low. With usage of free Cloudflare plan, GTMetrix considers the CDN acceptable. Unused CSS and JavaScrpt were removed even without the cache plugin. Static assets were cached with an efficient cache policy. JavaScript execution time and number of DOM elements were low. Network payloads were also not that high.

The TTFB times were higher, since Cloudflare APO service was NOT used. The initial request took more than 1 to 1.5 seconds in most of the page loads. Plugin resources like icon images and CSS were also taking around 300 to 500ms. The star rating plugin showed a lot of difference in page loading times. Jquery and some other javascripts were also taking considerable time. Google Fonts were used on this site and were loading at the same time. 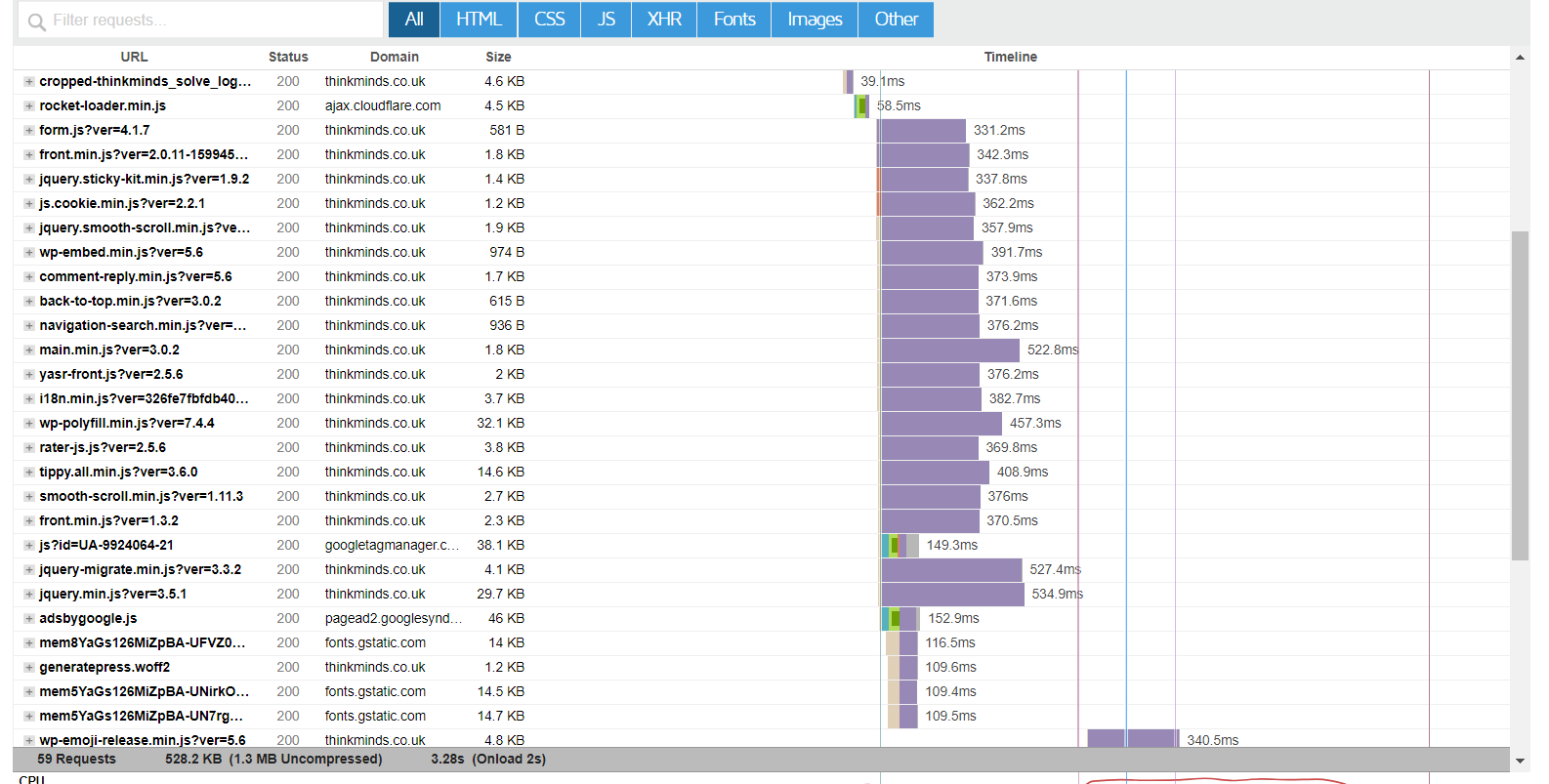 AMP pages were showing lot less number of resources compared to the desktop pages. The TTFB times were also high when not using the Cloudflare APO.  It was expected that using AMP would reduce the initial server response time. But to the contrary, it was as high as 1.3 to 1.5s.

Most of the other resources were from font files. PageSpeed Ninja did NOT have much effect on the AMP pages. As these mobile pages were already served from Google CDN cache, these were showing considerable less number of CSS and JS resources. The size of the AMP pages were also around 500KB.