Automatic Platform Optimization (APO) is a service from Cloudflare that boosts speed and performance of the entire site. The advantage of using this product is that all your content is served from their edge servers. Visitors see speedy sites when they visit your site.

Typically free versions of Cloudflare CDN will only cache static content. The initial server response time is an important performance metric for page speed web vitals. Time to first byte (TTFB) is an important parameter during page load time. The lesser the value, the quicker the content opens to the visitor.

This response time is vastly reduced after the first file is served. Third-party fonts and other javascript resources are quickly served to the end audience, with the help of the nearest server network. This reduces the round trip time to the original destination. Sites will display the content much sooner. This results in better First Contentful Paint (FCP).

In order to see the benefits of APO to WordPress sites, I decided to test this feature on a couple of sites. I was initially using the free version of Cloudflare and upgraded to the APO service with a $5/month charge.

Site with Ads and No AMP Pages – Cloudflare APO Effect

This site had considerable traffic, plugins and resources. When I tested this site with PageSpeed Insights, the score was very less. The major improvement expected with Cloudflare APO was reduction in TTFB and FCP times.

I was not using any Accelerated Media Pages (AMP) on this site. But there were approximately 30 plugins on this site. Also, video and display ads were being served on this site. Since Google Adsense Ads cannot be cached, the page load time was higher than plain sites.

Since Cloudflare APO was expected to reduce the TTFB and FCP values, I tested some of the site pages using GTMetrix test. This site was on a managed WordPress hosting plan of DreamHost. This gave the additional benefit of Varnish cache and FVM Cache Pro plugins.

The first page loaded quickly within about 100ms. This is very quick TTFB time compared to not using the Cloudflare APO service. All the major CSS and JS resources were loading quickly between 80ms to 100ms.

As mentioned by the Cloudflare blog, it was expected that the site would be served more quickly to the visitors when using the APO service. But as mentioned earlier, the site had video ads and display ads.

The total load time was 7.29s which is not a true indication of the page load time. This was only because the video ads were running continuously and this was shown on the waterfall page of GTMetrix test. 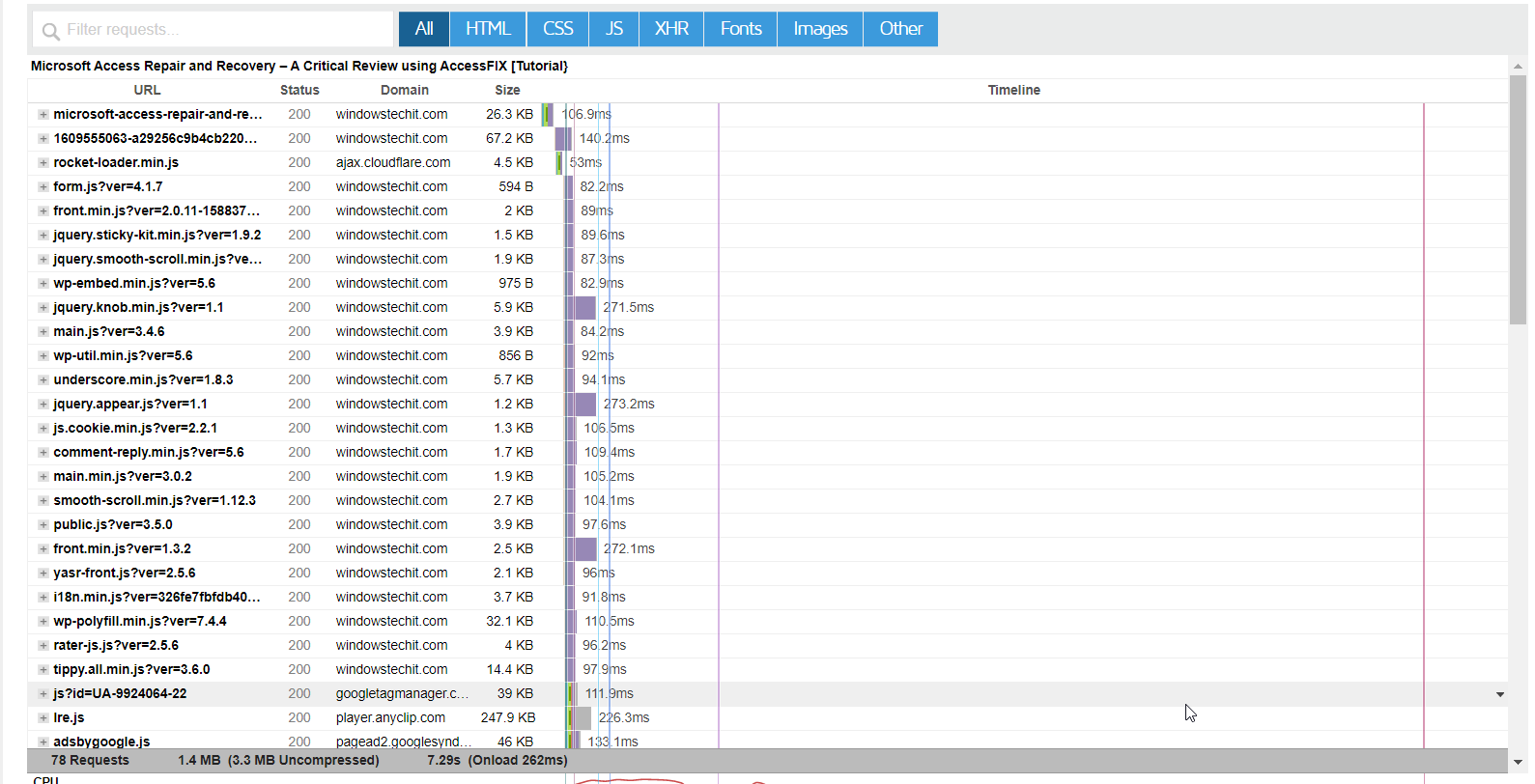 Due to the use of managed wordpress hosting of DreamHost and Cloudflare APO, the TTFB times were much lower. The JS resources were also taking much less time.

The web vitals also were showing a significant improvement on using the APO factor. FCP value was only 461ms, which was green in color. The speed index, cumulative layout shift (CLS), largest contentful paint (LCP) were 0.7s, 0.07 and 0.6s. They all were showing green indication.

This is to show that the web vitals were good for this site. Though video ads were showing high load time on the waterfall model, it should not impact the page load factor of the site. 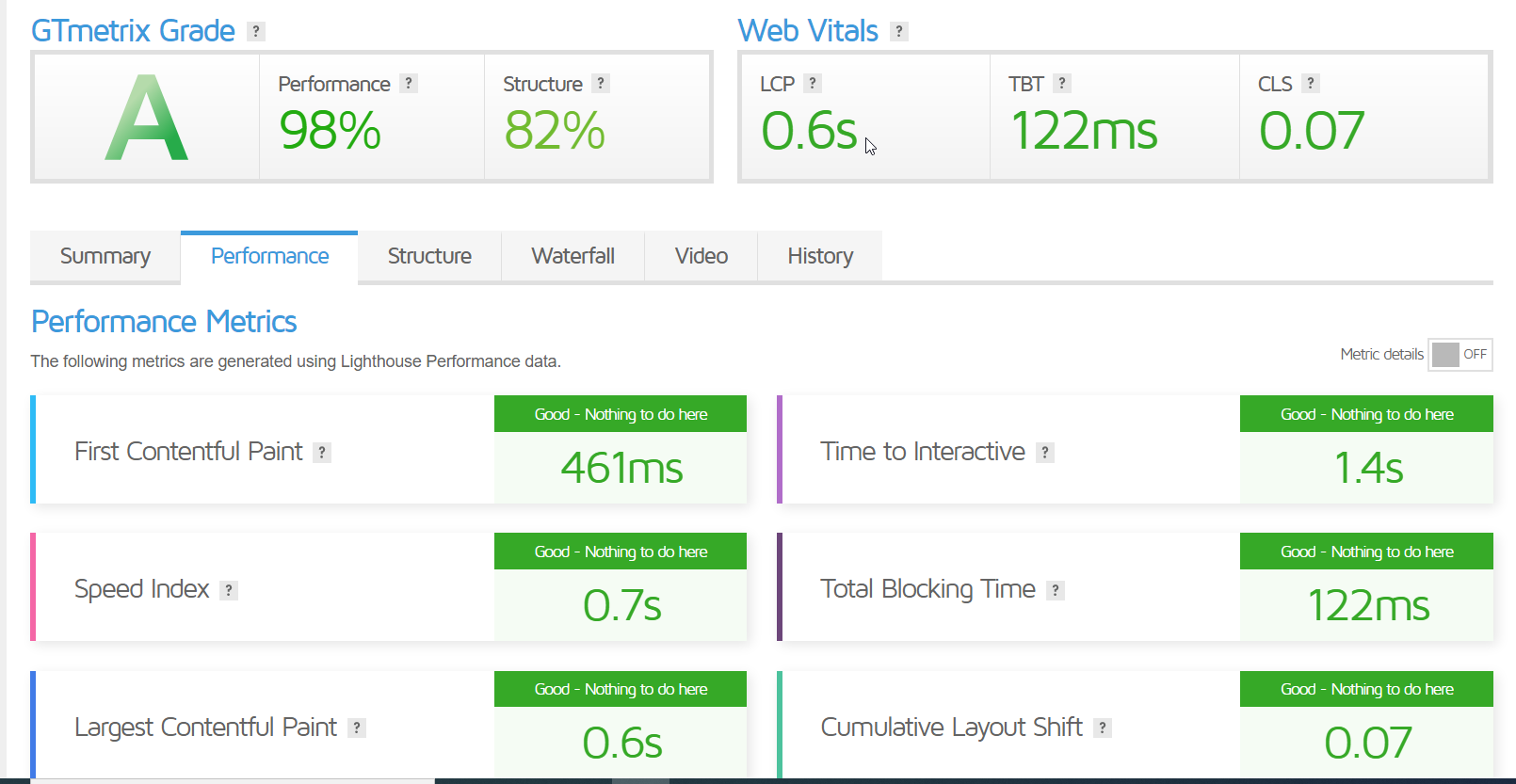 Site with No Ads and AMP Pages – Cloudflare APO

Another WordPress site was tested for page load speed using Cloudflare APO service. This site was not using the server cache or the Fast Velocity Minify plugin to cache the site pages.

This site was using the free Cloudflare version with APO. For caching purposes, PageSpeed Ninja plugin was used. It had 21 active plugins and most of the CSS and JS resources from plugins only.

The first page was served quickly with 350 to 400 ms. This shows fast TTFB time. Compared to the earlier site, it had no ads and was a plain site with minimal resources. But the TTFB was higher, because the site was not using any Varnish cache or the default cache plugin of DreamHost.

Since the site was also residing on a shared hosting plan, that could also have impacted the TTFB time. The desktop version had 250 to 300 ms higher first page load serve time compared to the previous site.

This image shows the results of deadly combination of AMP and Cloudflare APO. The TTFB times were much lower and the number of JS resources were also lower.

FCP was also good with 0.7s. The other web vitals of LCP, CLS, speed index were 0.7s, 0.06 and 0.7s. These values were in par with the earlier site. It gives an indication that managed wordpress hosting or varnish cache did not have any effect on these core web vitals.

But the waterfall model was showing that JS and CSS resources were taking much higher time compared to using the managed wordpress hosting of DreamHost. So the promise of reduction in load time of dynamic pages or JS resources was not met using only APO.

Since this site was serving AMP pages for mobile, the TTFB and other metrics were checked for speed.

The first page for the AMP version was served more quickly than the desktop pages. This was as low as 89ms. So the double combination of Cloudflare APO and AMP can have a major impact on TTFB times.

This is the image of core web vitals of GTMetrix test without using ads. AMP Pages were served using a plugin. Shared Hosting was used. PageSpeed Ninja cache plugin .

From the two above sites using Cloudflare APO service, it could be observed that TTFB and FCP values were good. As promised by the company, this shows remarkable improvement when using the APO feature.

In another case-study the same metrics were compared without using the APO. The first page was served with a lot higher time. Ads could show high page load time. Also using DreamPress kind of managed wordpress hosting can reduce the load of JS and CSS resources.

In another deadly combination, using AMP and APO together also can drastically improve the performance metrics of the site.

Website Speed Test with and without PageSpeed Ninja and Cloudflare APO